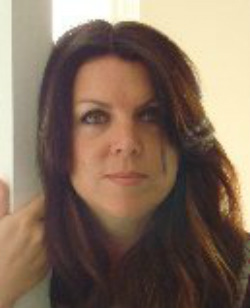 Wecome to,
The talented and beautiful author, Suzy Turner
Interview and introduction to her novels: 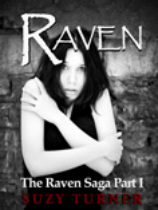 What sparked the idea for Raven?
It was during a holiday to Canada in 2009. There was gorgeous little bay in a place called Powell River that just blew me away. My mind went into overdrive as I could so easily imagine supernatural goings on there behind the multitude of trees behind me, the mountains in the distance, the little green islands in front of me. There were also lots of crows and ravens wherever we went. The actual idea for the book came to me a couple of months later but it was that setting that started it all off.

In your novels, who is your favorite character?
That's a tough question. I can't say I have a favourite but I do have one who is lots of fun to write called Ruby Madison. She's actually a ghost with a great sense of humour. She's not in the first book, as she doesn't appear until the sequel, December Moon.

You have beautiful covers, who designed them and how much input did you have?
Thank you. They're very simple as I bought the images from an image stock site and then added the words myself in Photoshop

Do you recall how your interest in writing started?
I've always loved to write but it wasn't until I was in my 20s that I realised I had it in me to actually write novels. I'd read a Cosmopolitan interview with an author I loved at the time (Jenny Colgan) who explained how she found her novel at the centre of a bidding war. I remember thinking that I ought to give it a go myself. 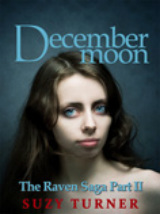 If you could gather together authors for a party, who would you invite?
They would mostly be the fabulous indie authors I've met over the past year, including yourself, Shalini Boland, Johanna Frappier, Pauline Barclay, Samantha Towle, Patti Roberts, Claude Forthomme, I could easily go on as there are so many amazing writers out there! As for published authors, I'd say JK Rowling, Stephenie Meyer, Miranda Dickinson, Cecelia Ahern, Margaret Atwood. Clearly it would be a great girlie night!

I know you love music. Do you need quiet or do you listen to music while you write?
It depends what I'm writing, really. If I'm writing creepy scenes then I like music to match. For instance, when I wrote Raven, I listened to songs from the Twilight soundtrack as well as anything else with a spooky twist to it.

You've been a feature writer, assistant editor for a magazine and magazine editor. Do you think all this experience contributed to your expertise in writing novels? I was certainly impressed with your writing and found myself pulled right into the story.
Thanks Pam, that's really kind of you to say. I do think my previous work has helped me a lot. I believe that any form of writing helps everyone to becoming a better writer. As does reading too. My being an assistant and magazine editor certainly helps in the editing process!

Do you use an outline when you write? And what is your work schedule like?
I don't actually. I am a fly by the seat of my pants kind of writer! I start off with a rough idea as to where the story should go but I often find that the characters go off in different directions usually leading to a better conclusion than the one I had in mind. My work schedule has been a bit topsy turvy lately. In fact, I've been a bit useless! I was supposed to have written half of my book by now but I've been a bit distracted by so many other things. It will be finished on time though!

Who are your favorite authors?
I have so many favourites these days. Since the advent of e-publishing, I've discovered a whole host of authors I would never have had the chance of reading and I love that about publishing today. As a teenager, I loved to read Danielle Steel, Jilly Cooper, Jackie Collins and the like. In fact I do believe that I learned a heck of a lot from those ladies, if you know what I mean ; )