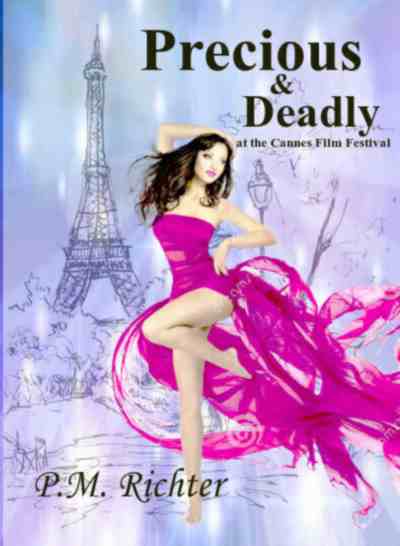 Superstar, Sybil Cantrell, has a twitchy feeling about her trip to Cannes. Something bad will happen.
She's Right
As bodyguard to a famous international film and Broadway star, Sybil Cantrell, Lolita has to deal with international jewel thieves from Serbia who have targeted her client's fabulous collection of gold and gems, as she attends the famous Cannes Film Festival in France. To pursue their goals, the Pink Panther gang of jewel thieves decide that it would be much easier to get rid of Ms. Cantrell's bodyguard, leaving the actress vulnerable. Lo fights off her attackers as they try to get rid of her pesky presence guarding the international super star.. The situation is so dire that Lolita's boss at the Fontaine Agency, Lance, comes to France. Besides catching the jewel thieves, Lance and Lolita have their own undercover job. Hiding their fragile relationship from the canny film star, Sybil. Lolita proves she's a deadly opponent to the gang of thieves, and that she's precious to Lance.
​Get it >> here 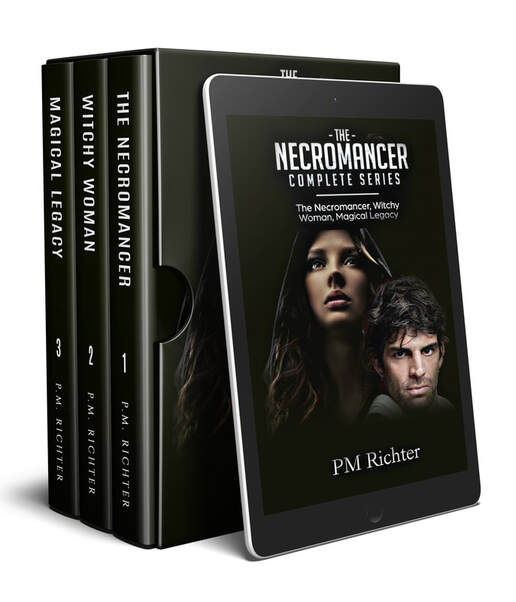 ot
Get the whole Necromancer Series, three complete novels in one fell swoop.  Plus, you will save about 50% by getting the three novels this way.  About 1,000 pages, with no filler.

Amazon
Or here to get it at your favorite store 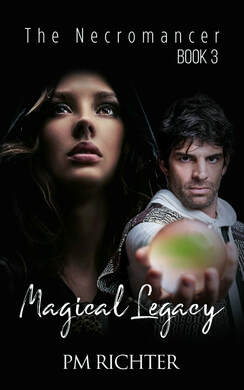 ​Can supernatural ability be passed on to a new generation?

Michelle was gifted magical talents from an ancient witch relative who was hanged in Salem long ago.  Omar has dark magic, as a Necromancer and Warlock—perhaps a Demon.  What happens to their progeny?

A fight between good and evil magic is brewing.  Two opposing sides of the supernatural will affect three innocent little children.  Their lives hang in the balance when Omar tries to claim them, abducting them from the only mother they know.  He wants to teach them about dark, evil sorcery.

Michelle endeavors to save the children from the darkness and danger swirling about them.  It’s a fight between good and evil for all involved.  Especially for Michelle, tempted by the easy, wicked, dark magic, which could change her forever.  She is a natural born witch with healing abilities and the power of precognition.  She was deemed a White Witch, but the black powers are enticing her.

There is a choice to be made.  One leads to greedy temptations and malevolent acts.  The harder choice is to remain honorable, using the special paranormal powers only for kindness, healing, and generosity.

Opposites, as in yin and yang, are clashing for control of a beautiful witch and three little children with extraordinary powers. 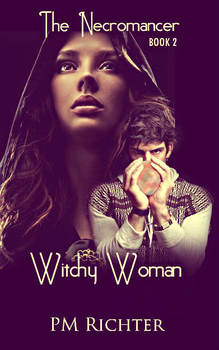 Book 2 of The Necromancer

Omar is free, out of prison, on bail in Hawaii.
Michelle knows she's in danger, but never believed he would strike again so fast. This time Omar takes control of her and they disappear.
It's up to Heather, Michelle's best friend, Rod, Michelle's true love, and Vincent Middleton, a professor of the occult, to find Michelle. When they do, will they be able to fight Omar's strange psychic abilities, or will they, too, become his victims?
This story features Abigail's long dead spirit, trapped within a gorgeous and enormous haunted diamond--a gift from Omar to Michelle.
Lucifer, the cat who has become Michelle's 'familiar,' is instrumental in the scary events which enfold. 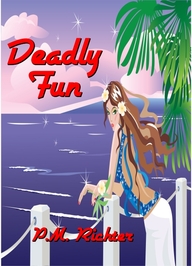 
She calls herself Lo. Workimg in disguise and undercover, always with an assumed identity, she her unusual beauty to ferret out information. Lo works for an independent agency associated with the FBI. Her boss knows she has a checkered past, with time spent in prison, but she's also smart, and has a law degree.

Her new job involves a cruise to the Bahamas with her boss to investigate an enforcer for the Mob. But this will be like no other job she has encountered. By the end of the voyage she has chased suspects through the tropical islands, been in physical confrontations with knife, fist and firearms; the deck is awash in blood. Can she survive the deadly fun cruise--and her boss, who may prove even more deadly than the Mafia men she uncovers? 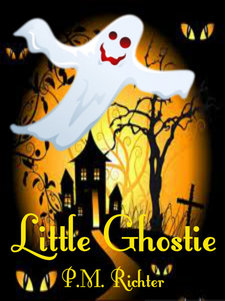 LITTLE GHOSTIE
When a tiny ghost is caught on Halloween by the dreaded Ghost Buster Hunters he is placed in a Haunted House with other magical creatures. Cindy and Bobby, two children who can actually see ghosts, attempt to free the tiny ghost from his trap in the spooky house.


(This is a book for children with lots of pictures for their enjoyment. Also includes a recipe for Triple Dipped Smores Candy Apples.) 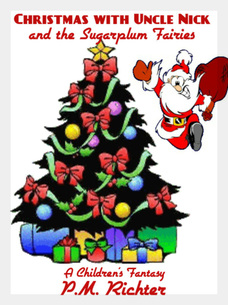 Christmas with Uncle Nick and The Sugarplum Fairies

Here is my newest book for children - A Christmas story for parents to read to their children.  For ages 3 to about 5.  It will be out in print as well, soon. There are lots of pictures for their enjoyment!

A mysterious relative called Uncle Nick comes to babysit on Christmas Eve. The children, Bobby and Cindy, are surprised because they didn't even know they had an uncle. When the lights go out, Uncle Nick starts telling them wonderful Christmas tales and fantasies. (The entire Night Before Christmas poem and a recipe for Sugarplum candy is included.) 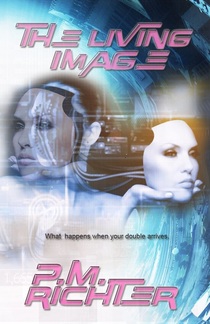 Sabrina Miller, a fashion designer in Los Angeles, is stunned when she meets her own double. Her shock turns to terror when she learns that her duplicate was fabricated by a scientist and that there are people intent on killing her to protect their new secret creation. The CIA wants to study her. The Russians wants to abduct her for the technology. The Japanese don't care if they have to tear the woman to pieces--they want to know how she was made 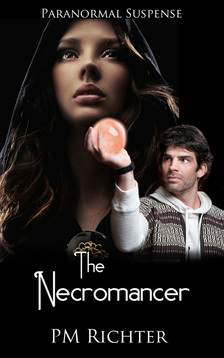 Michelle was brutally attacked in her locked hotel room in Las Vegas. The police didn't believe her and thought she must have lured a man up to her hotel room for a little sexual adventure, which went dangerously out of control.

Michelle decides that an affair with a wickedly handsome man who moves into her building might cure her of the humiliating, embarrassing, and uncontrollable anxiety attacks which plague her whenever she finds herself alone with a man.

How could she know that she made the worst possible choice? 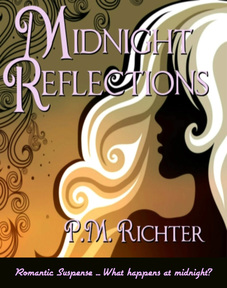 Julia's midnight reflections actually happened at about four in the morning.﻿ She was far from home, lonely, watching a handsome man sleeping in her bed at the Beverly Hills Hotel. Robin had put himself in terrible danger so she could solve a mystery. She managed to rescue him, but now she was feeling guilty for putting him through hell.

Julia is playing a risky undercover role, working for a famous movie producer, while trying to find out if a tragic death was really murder. The other mystery was who the man sleeping in her bed really was. She's sure he's hiding his true identity.  Can she trust him? 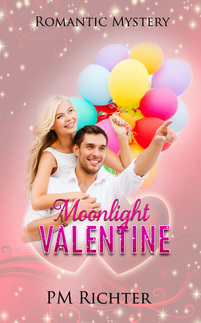 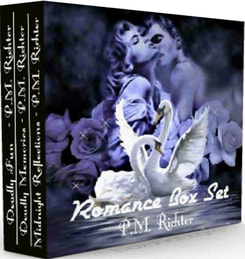 Deadly Fun - Take a cruise with a beautiful sleuth to the Caribbean with her boss. Also aboard is a deadly Mafia family. Envision collision?

Deadly Memories - When Andrea is in a car accident after a posh Hollywood party and can't remember how it happened, a chain of events enfolds, leading to her marriage to an Ambassador's son in France. But what she can't remember might kill her. 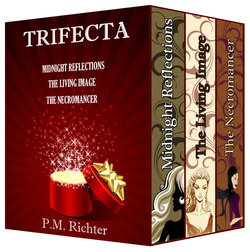 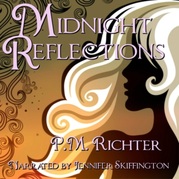